Not a lot to show tonight, but I was able to finish another basket and some Granny Smith Apples.  Hope you like them.  Funny, I have been craving some sliced apple and cheddar cheese all day.  Now I'm REALLY craving it. 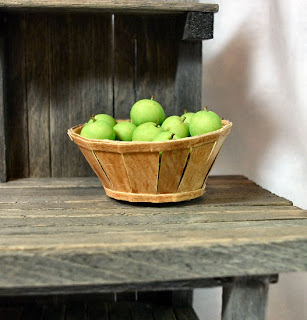 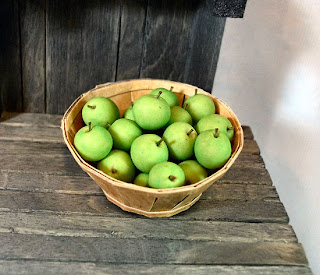 I promise I'm going to work on a basket tutorial for you folks someday soon.  I really need to make some pumpkins for this table too! What is a Fall Harvest table without pumpkins?

Hello everyone.  I have had a lot of response about the blog I did last night containing the potatoes and pears. 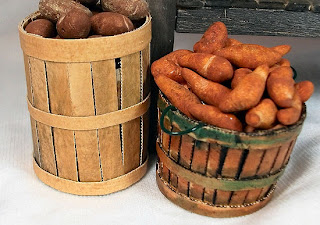 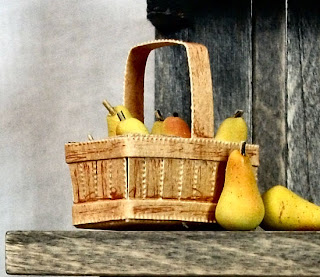 First, thank you everyone for the very kind words on the harvest and a big welcome to all my new friends.

The two round baskets were made following the directions given by Joann Swanson on her blog last year.  I took her designs and did some additional washes and changed up the straps a bit, but if you are looking for some baskets to hold your own harvest, these are super easy and her pattern is wonderful.  If you have not seen her blog, please hop over and start following it.  She is amazing and has some of the most creative ideas I have ever seen.  Below is the link to the blog post where she explains the baskets.

For the basket holding the pears, I took the same general idea and cut out my own pattern.  Perhaps I'll have time soon to throw together a little tutorial on the small rectangular basket.  I'm a firm believer in sharing knowledge so the hobby continues to grow.  Besides, this might give me a chance to use my new video camera and make a video tutorial.  WOOHOO!!

People suggested that I work on a harvest theme for my workbench so I have taken that suggestion and tried making some baskets and food.  Some of you may remember that I have made some bread and cheese in the past, but that has been the extent of my food making ventures.  I'm pretty happy with the way the first crop has turned out.

Remember to click the pictures and make them bigger. 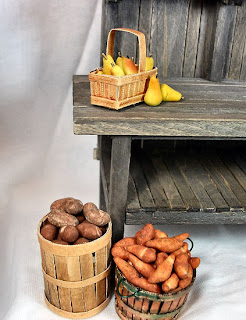 Looks like the farmer has just returned with a couple bushels of potatoes.  He had a good crop of sweet potatoes and some great baking potatoes.  ﻿ 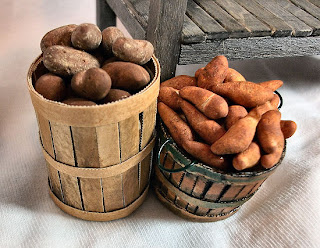 The pear trees were also full of ripe fruit and the birds were good this year and left them alone.﻿ 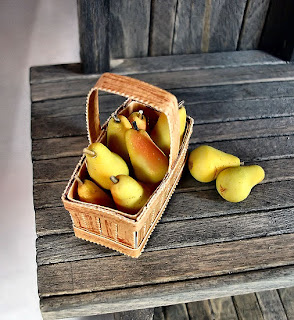 One thing that I have observed when making fruit.  I have absolutely NO idea on how much clay to mix.  I wanted to do a small batch of pears.  Well, after mixing up the clay and getting the base color just right, I realized I had mixed up much more than I will need right now.  So far I have made 25 pears and I have enough to do 25 more at least. HA HA!  Perhaps I can take the remainder pear mix I have and throw together some nice apples.  Maybe some green Granny Smiths and some nice Gala.  I also need to get some pumpkins and gords made.
I think I'm also going to try and play with the resin again and make some jars of Apple Butter.  I have already designed the labels, now just need to figure out the right mix for the contents.
Till later!