Fall is in the air

Today I spent about an hour outside.  It was a much needed break from the fumes of refinishing wood floors and I had to do something while the first coat of Poly was drying.

It was about 80F degrees outside but on the deck was a nice crisp layer of leaves and acorns. Even in the warm temperatures I could see the changes in the shadows and there was a breeze rustling through the drying leaves on the trees.

Yep, Fall is in the air and it is this time of year that I always start thinking about Halloween.  Now if you didn't know it, that is my absolute favorite holiday ever.  When else can you dress up and be as stupid looking as you want to be and nobody cares at all?

Case in point...me last year at a Halloween party.  Theme was clowns and since real clowns scary the living crud out of me, I decided on insane killer clown.  Was a hit at the party and you should have seen the looks from the customers at IHOP when we stopped for a late-night breakfast. HAHA 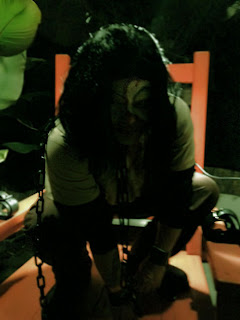 For many years I worked for a haunted house in Charlotte, NC and I really miss doing that.  It started out as a way to make a little extra money and by the time I left there I had been in a few TV commercials and even made the cover of a local newspaper.  Nothing like giving people the chills to make for a satisfying night of work. BWUHAHAHAHAHA! 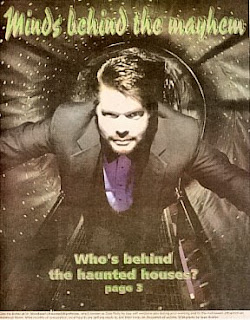 Since this blog is really supposed to be about my miniatures, I thought I would toss out a few pics of a little fella I made a couple years back.  His name was Jacob and he was a troubled soul.  He is about 8" tall from the base to the top of his head.  I used plastic skeleton parts as a base, but the remainder was constructed by me, including the feathered/flocked crow.
You should never work with black magic if you don't know what you are doing, especially if your fellow villagers frown on that sort of activity...it can be bad for your health.
His name was Jacob, on a farm he did toil.
No matter his efforts nothing grew from his soil.
He was caught by the village asking aid from below.
Now he hangs in his field, just him and a crow! 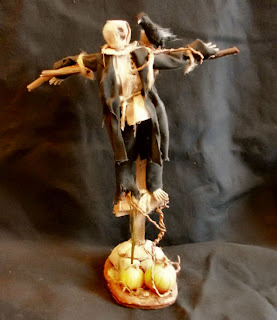 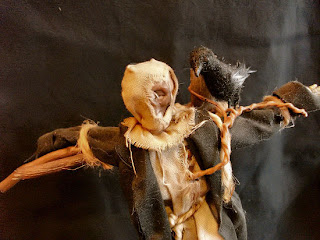 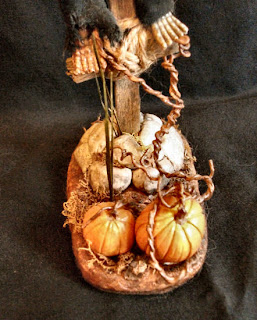 Email ThisBlogThis!Share to TwitterShare to FacebookShare to Pinterest
Labels: Halloween

Some of you may know this, but most probably don't.  Besides my miniatures, I'm a huge fan of Tiki and the Tiki Era. I'm not talking the brightly colored stuff that shows up in the party stores in the summer, I'm talking the old Polynesian restraunts that sprang up in the 40s and 50s and remained popular until the 70s.  I collect vintage mugs and memorabilia.  When we purchased the new home, there was a small bedroom that I quickly claimed as my office.  Not only will it be were I work on my miniatures, but it will also be my little slice of Tiki heaven.  A quiet getaway where I can relax and dream about being in a far-off land, sipping MaiTais and enjoying the tropical breezes.

I am guessing that this small bedroom belonged to the daughter. 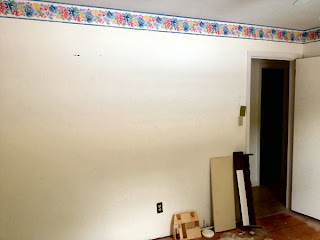 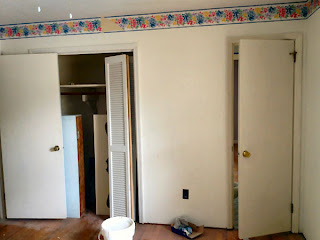 With some paint on the walls, the floor redone and some creative molding to cover the horrid vinyl wallpaper trim, it is starting to get that tropical feeling. 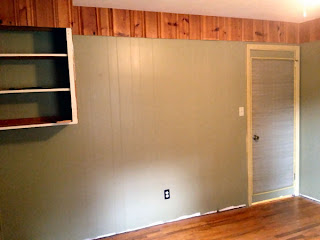 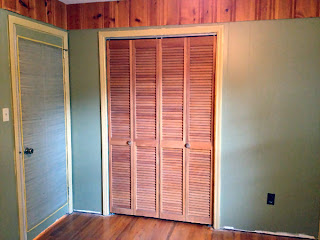 Next came some of my vintage decor on some new shelves. 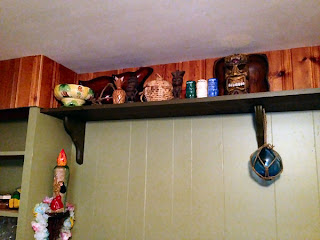 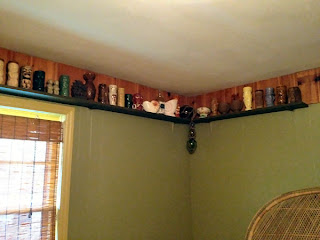 Hopefully it won't be long now till I'm able to sip a nice tropical drink in this chair and dream about what new minis I can create. 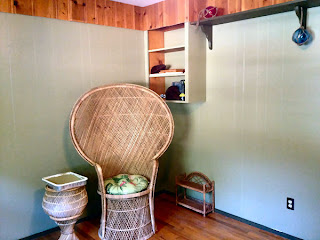