As you may know, I'm slowly packing up our current home and moving into our new home.  This includes my WRECK of an office.  It has been one of those weeks.  We have a saying..."Sometimes you are the windshield and sometimes you are the bug.".  Well this week I have been all bug.  Nothing is getting done as I would like and I have not been able to get my video made for the book tutorial.

However in all the chaos of the week, I did happen upon a couple boxes in my office closet that I had not touched in almost two years.  I love things like that.  It is like finding treasure.  In this box were some cherished minis as well as some items for projects I have been wanting to do.  You know what that means....more pics and more video inspiration.  :-)  WOOHOO!!!

First a few dolls I did back when I was still doing them.  I have to admit that I miss working on these little people.

This is Ruby.  She is the first doll I ever did and I named her after my mother.  A dear friend sent a kit to me right after I started doing miniatures and told me to "See what you can do with this".  This is what I created.  I love her and she will always have a special place in my world. 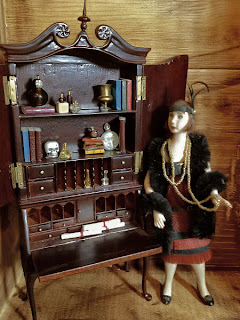 This is Elrac and he was my first male doll.  I never wanted to do the same Victorian dolls that everyone else was doing.  This genie was made and for years sat on my computer monitor to keep my company.  He is named after a dear friend that I lost named Carl.  (Elrac is Carl backward).  The fabric for his genie costume was made from fabric I used to make Carl his last Halloween costume.  I later did an another genie doll and he was exhibited in the St. Louis Miniature Museum before being sold to a private collector. 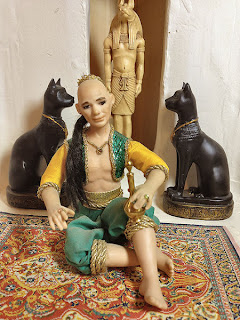 This is Miss. Scarlet.  At one point in my miniature life I had wanted to make an entire cast of characters from the game CLUE.  I have never been happy with her look and more than likely she will be completely stripped down to parts and redone into something much more suiting my character.  I always thought she looked more matronly than she should. 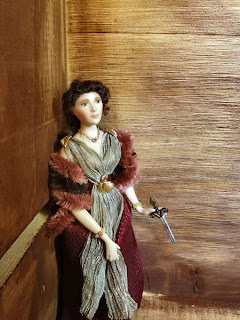 This is my attempt at making a Dolly Parton doll for my partner.  He is a HUGE fan of Dolly and I promised I would make him a doll.  Well that was about 10 years ago and you can see she still isn't done.  She has been sitting in that poor 80s style outfit for too long.  No nails, bad hair and a dusty guitar is not what she deserves. She will also get stripped down and redone into something MUCH more appropriate. 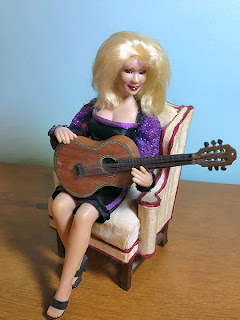 This next picture shows an Egyptian display I started a long time ago and it gives a good example of BAD paper clay use. I was so discouraged with the outcome that it was packed away and never completed.  Perhaps now I know more things and can turn it into a winner instead of a sad thing.  Elrac was never meant to sit in this room, he just seemed happy to be in that picture. :-)  The display measures 8 inches square and it is 7 inches from the floor to the top of the wall.  Another bad bit of planning on my part.  Short ceiling.  ARGH! 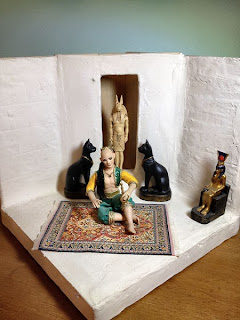 I am also a huge fan of boxes.  I don't care what kind of boxes they are, I just like boxes.  I don't know why and I could never explain to you a reason.  Cigar boxes, wine boxes, decorative boxes...all of them are loved by me and I have a few great ones.  Here are two that I hope to make miniature scenes in one day.
First up is a large wine box.  It measures 10inches wide, 7.5 inches deep and 13 inches tall.  It is a great size for a display.  I always thought it would make a great wine cellar with lots of bottles and barrels in it.  Perhaps a set of stairs that disappear and give an illusion of more around the corner.  I'm going to have to really do something with that.  The lid actually is attached and swings open. ﻿
I put Ruby and a Bespaq Secretary in there to give you an idea of the size of the interior.  Lots of room if I get really creative in the space layout. 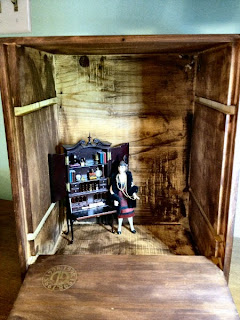 The last box I'm showing you is really going to take some creative thinking to come up with an idea to put in it.  It is a small wooden box with an opening on the lid.  It held a very nice bottle of rum at one time (rum long gone, box still here).  The interior dimensions are 7.25 inches wide, 5 inches deep and 9 inches tall.  I have one idea for it already and that is to make the interior a very arabesque feel and put Elrac in there as a permanent display.  Still pondering.  The details on the outside are in brass and are wonderful.  Should make a fun display piece one day. 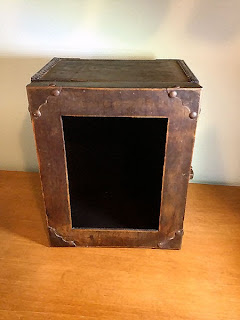 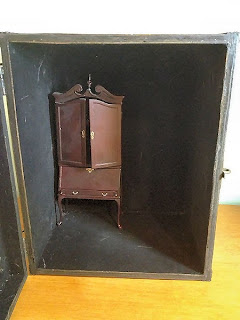 That is all for now.  Hope you get a kick out of some of my old stuff and some of my unfinished projects.  There are lots more including an art deco room with a secret door and a Metaphysical witch shop that is still in the works.  Oh and of course the Lisa's Country Cottage that I did in the videos.  Guess I have enough to keep me busy for a while.

Did I mention I want to also do a complete, vintage-inspired tiki bar like Trader Vic's?  HA HA Need to teach myself how to make mini bamboo.  :-)