Hello again everyone.  Were you worried that I would disappear for a while after getting all those pics from Chicago posted? Nope, I'm here.

As some of you are aware, I recently lost my mother and while I was up home for the services, I found a couple projects that I had made for her as a Christmas Gift and a Mother's Day Gift a while back.  As sad as it was to have to bring them home, I'll always have them as a great memory.

When I was growing up, Christmas was always a big deal in our house. After Thanksgiving was done and December was rolling around, Mom and I would start pulling out the Christmas decorations.  Mom was a classic decorator and she felt Christmas was elves, shiny ornaments, snow and toys.  For Christmas one year, I made a couple elf dolls and placed them inside a trunk full of decorations.  My thought being, they were about to start decorating the large snow covered tree behind them.  She told me the little mischievous one in the trunk reminded her of me when I was smaller.  I loved the tinsel and I was really good at getting it tied up in knots.  I love the way the elf in the front is sitting there patiently (or not) while the smaller elf gets untangled.  I need to find a dome or creative box to put this in so it stays pretty. 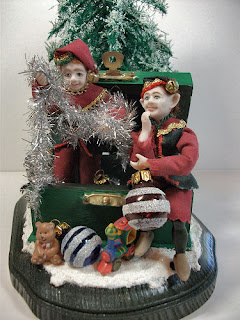 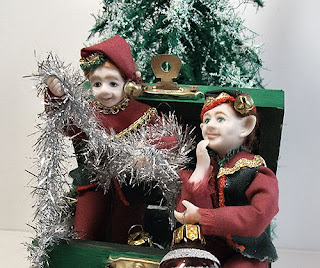 No anyone that knows my mom would know just how much like her this next project is.  My mom grew up in a small house on the side of a mountain in Virginia. She was a true country girl from the top of her head to her toes.  She used to talk about bringing water in from outside and putting it in the sink.  Everything in this project says MOM.  Growing up there were always African Violets on the window sill in our kitchen.  In the summer, tomatoes were grown and canned so we would have fresh tomatoes all year long till next summer. I remember well the speckled pot she would cook in and the small "hen in a basket" that she spoke fondly of from when she was growing up.  To this day if you open up a cabinet in her kitchen, there are TONS of pots and pans.  I'm not sure why she had so many, but we were never short of something to cook in or serve dinner in.  I can almost smell the breeze through the window while she cut up tomatoes for canning. 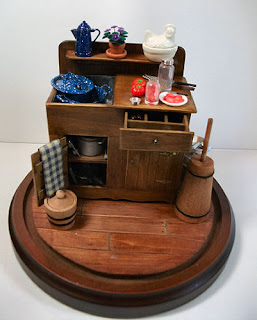 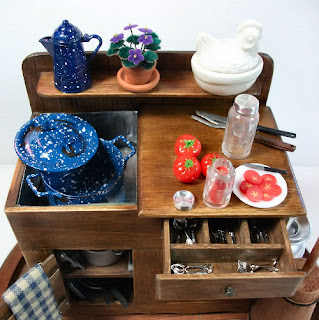 Thanks everyone for letting me do a bit of remembering.